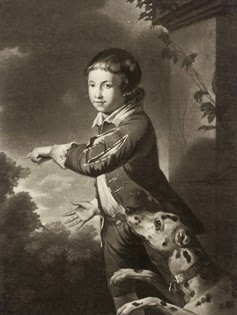 George Johnson was born in the Mohawk Valley in Fort Johnson near present-day New Amsterdam. He was the second son and the youngest of eight children of Sir William Johnson and Molly Brant.

The above painting is  not of George Johnson, but it is much as we imagine he might have looked as a child growing up at Johnson Hall.

When the American War of Independence broke out, George's mother took her children overland to the British fort at Niagara, at that time the scene of a vast refugee camp of Six Nations people  loyal to the British Crown. Molly sent her second son to school in Montreal for several years until she moved to the garrison on Carleton Island, where Lake Ontario joins the St Lawrence River. George was able to rejoin his mother and six sisters there.

At the end of the war, Molly relocated with her family and the rest of the garrison to the mainland to establish the new town of Kingston. George had property there until Molly's death. He later moved to the eastern end of Lake Ontario, nearer others in his family -- his uncle, Joseph Brant, and  another uncle by marriage, Daniel Claus.

Groundwood Press
When the American Revolution came to the Mohawk Valley, what happened to the eight children of the most powerful couple in Upper New York State, Sir William Johnson and Molly Brant?